Key: Linguistics is the scientific or systemic study of language. (It is a science in the sense that it scientifically studies the rules, systems and principles of human languages. It deals with a wide range of linguistic phenomena, analyzes them, and makes general statements about them.)

Key: Language is a system of arbitrary vocal symbols used for human communication.

Key: Language is arbitrary. As a design feature of human language, arbitrariness refers to the fact that there is no logical or intrinsic connection between a particular sound and the meaning it is associated with. The relationship between the sounds and their meaning is quite accidental. The onomatopoeic words are exceptions.

Key: Duality is a design feature of human language. Human language operates on two levels of structures. At one level are elements which have no meaning in themselves but which combine to form units at another level which do have meaning. This organization of language into two levels—a level of sounds which combine into a second level of larger units—is called duality or double articulation.

Key: Phatic communion is a function of language. Language is used to establish an atmosphere or maintain social contact between the speaker and the hearer. Greetings, farewells and comments on the weather serve this function.

Key: Formalism or formal linguistics is the study of the abstract forms of language and their internal relations. It fixes on the forms of languages as evidence of the universals without considering how these forms function in communication and the ways of social life in different communities.

Key: Diachronic linguistics refers to the study of language developments through time. It focuses on the differences in two or more than two states of language over decades or centuries.

2. If language is partially defined as communication, can we call the noises that dogs make language? Why or why not?

Key: No, we cannot call the noises that dogs make as language even though language is partially defined as communication. There are two reasons for that: first, language is human-specific, it is a system of arbitrary vocal symbols used only for human communication. Second, language has design features which are totally lack in animal communication systems. For example, language has two levels of structures: at one level are elements which have no meaning in themselves but which combine to form units at another level which do have meaning. Noises made by dogs represent certain meaning but cannot be further analyzed into smaller units. Language can be used to refer to things removed from the present time and context. We can talk about things happened in the past and future and in distant places, which dogs can never tell things they did the day before.

3. One of the main features of our human languages is arbitrariness. Can you briefly explain what this feature refers to? Support your argument with examples.

Key: Language is arbitrary. As a design feature of human language, arbitrariness refers to the fact that there is no logical or intrinsic connection between a particular sound and the meaning it is associated with. For example, we Chinese people use the sound “yizi” and Japanese use “isu” for the same meaning of “chair”; and we cannot explain why we use the letter symbol “book” for a book and “pen” for a pen. A dog may be called a pig if the first man happens to name it as a “pig”. So, the relationship between the sounds and their meaning is quite accidental. However, the arbitrariness of language is a matter of degree, the onomatopoeic words and the compounding words, for instances, are motivated in a certain degree.

4. What kind of evidence supports the idea that language is culturally transmitted?

Key: Language is culturally transmitted and it cannot be transmitted through heredity. Evidences are as follows: A human being brought up in isolations simply doesn’t acquire language, as is demonstrated by the studies of children brought up by animals without human contact. Animals transmit their cries simply from parent to child, while human baby doesn’t speak any language at birth. What language a baby is going to speak is determined by the culture he is born into. A Chinese baby born and brought up in London by an English family will speak English, while an English kid brought up in a Chinese community will speak Chinese. 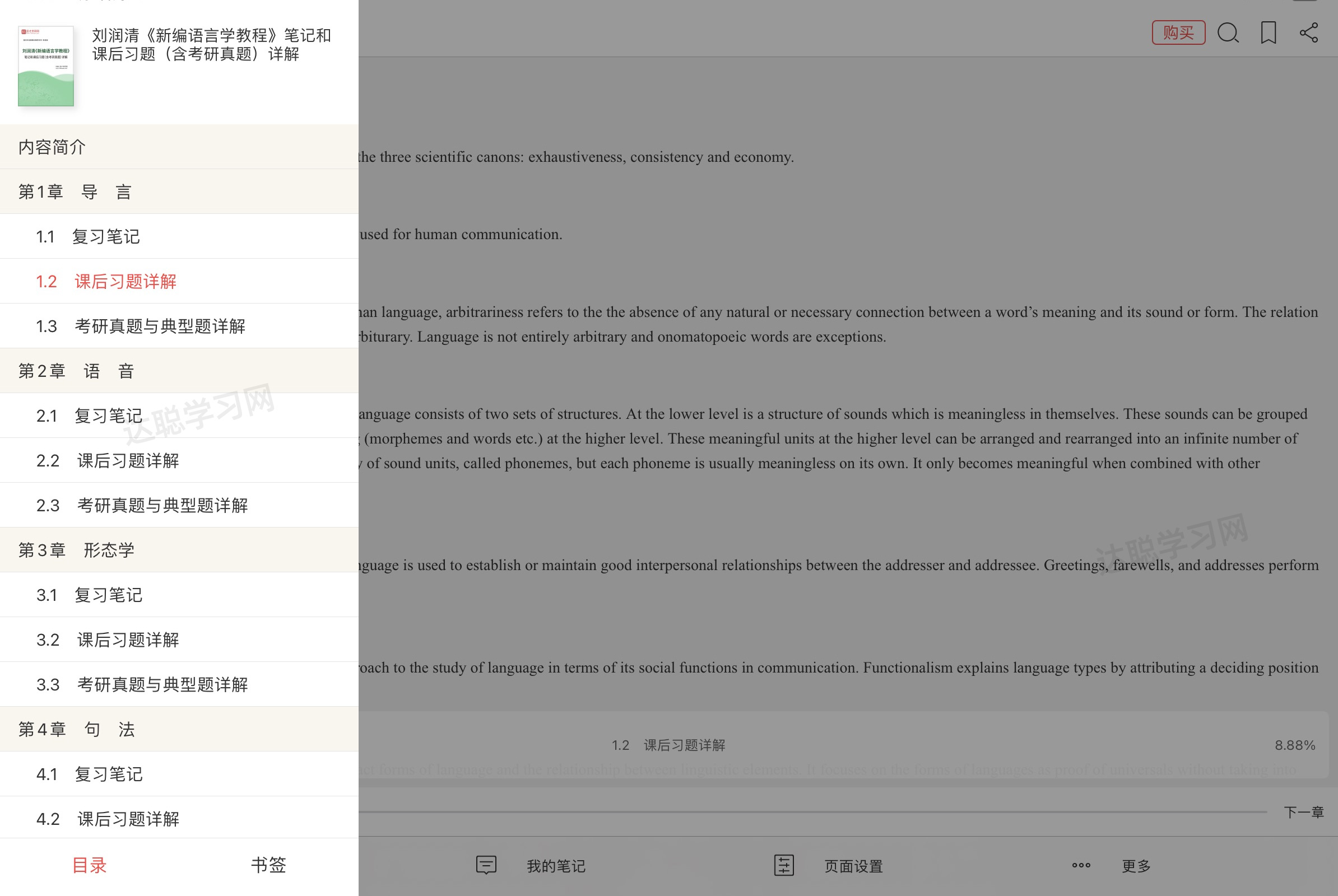