Directions: In this section, you will read several passages. Each passage is followed by several questions based on its content. You are to choose ONE best answer, (A), (B), (C) or (D), to each question. Answer all the questions following each passage on the basis of what is stated or implied in that passage and write the letter of the answer you have chosen in the corresponding space in your ANSWER BOOKLET.
Questions 1～5
The head of the Library of Congress is to name Donald Hall, a writer whose deceptively simple language builds on images of the New England landscape, as the nation’s 14th poet laureate today.
Mr. Hall, a poet in the distinctive American tradition of Robert Frost, has also been a harsh critic of the religious right’s influence on government arts policy. And as a member of the advisory council of the National Endowment for the Arts during the administration of George H. W. Bush, he referred to those he thought were interfering with arts grants as “bullies and art bashers”.
He will succeed Ted Kooser, the Nebraskan who has been the poet laureate since 2004.
The announcement of Mr. Hall’s appointment is to be made by James H. Billington, the Librarian of Congress. Mr. Billington said that he chose Mr. Hall because of “the sustained quality of his poetry, the reach and the variety of things he talks about.” Like Mr. Kooser, Mr. Billington said, Mr. Hall “evokes a sense of place.”
Mr. Hall, 77, lives in a white clapboard farmhouse in Wilmot, N. H. , that has been in his family for generations, He said in a telephone interview that he didn’t see the poet laureateship as a bully pulpit. “But it’s a pulpit anyway,” he said. “If I see First Amendment violations, I will speak up.”
Mr. Hall is an extremely productive writer who has published about 18 books of poetry, 20 books of prose and 12 children’s books. He has won many awards, including a national Book Critics Circle Award in 1989 for “The One Day.” a collection.
In recent years much of his poetry has been preoccupied with the death of his wife, the poet Jane Kenyon, in 1995.
Robert Pinsky, who was poet laureate from 1997 to 2000 said he welcomed Mr. Hall’s appointment, especially in light of his previous outspokenness about politics and arts. “There is something nicely symbolic, and maybe surprising,” Mr. Pinsky said, “that they have selected someone who has taken a stand for freedom.”
The position carries an award of $35,000 and $5,000 travel allowance. It usually lasts a year, though poets are sometimes reappointed.

1、Donald Hall ______.
A．uses simple English to express the images of the New England landscape
B．dislikes the idea of impacting government by the right side of the religion
C．is the 14th poet laureate appointed by the Congress
D．is a member of the advisory council of the National Endowment for the Arts
【答案】B
【解析】细节题。第二段第一句指出“Mr. Hall…has also been a harsh critic of the religious right’s influence on government arts policy.”，可知Mr. Hall对宗教右翼势力对政府的影响持批评态度，因此选项B符合题意。

4、Which of the following is NOT true of Donald Hall?
A．His family emigrated to the U. S. decades ago.
B．He is a direct and upright person.
C．He is a powerful person in American Congress.
D．His style of poems follows the traditions of America.
【答案】C
【达.聪解析】是非题。第二段第二句提到Donald Hall是advisory council of the National Endowment for the Arts的一员，并不是说他是美国议会很有影响力的一个人。因此选项C表述错误。

5、Which of the following is true according to the passage?
A．Mr. Hall has published many books and magazines on poems.
B．Mr. Hall is a critic of literature in the U. S. .
C．Mr. Hall has got many prizes for his talents in writing.
D．Mr. Hall has got support from his predecessor
【答案】B
【达.聪解析】是非题。第六段最后一句指出“Mr. Hall获得过许多奖项，包括于1989年为书集《一日》所作书评所获的国家书评奖”，由此可知Mr. Hall也是一名文学评论家。因此选项B表述正确。 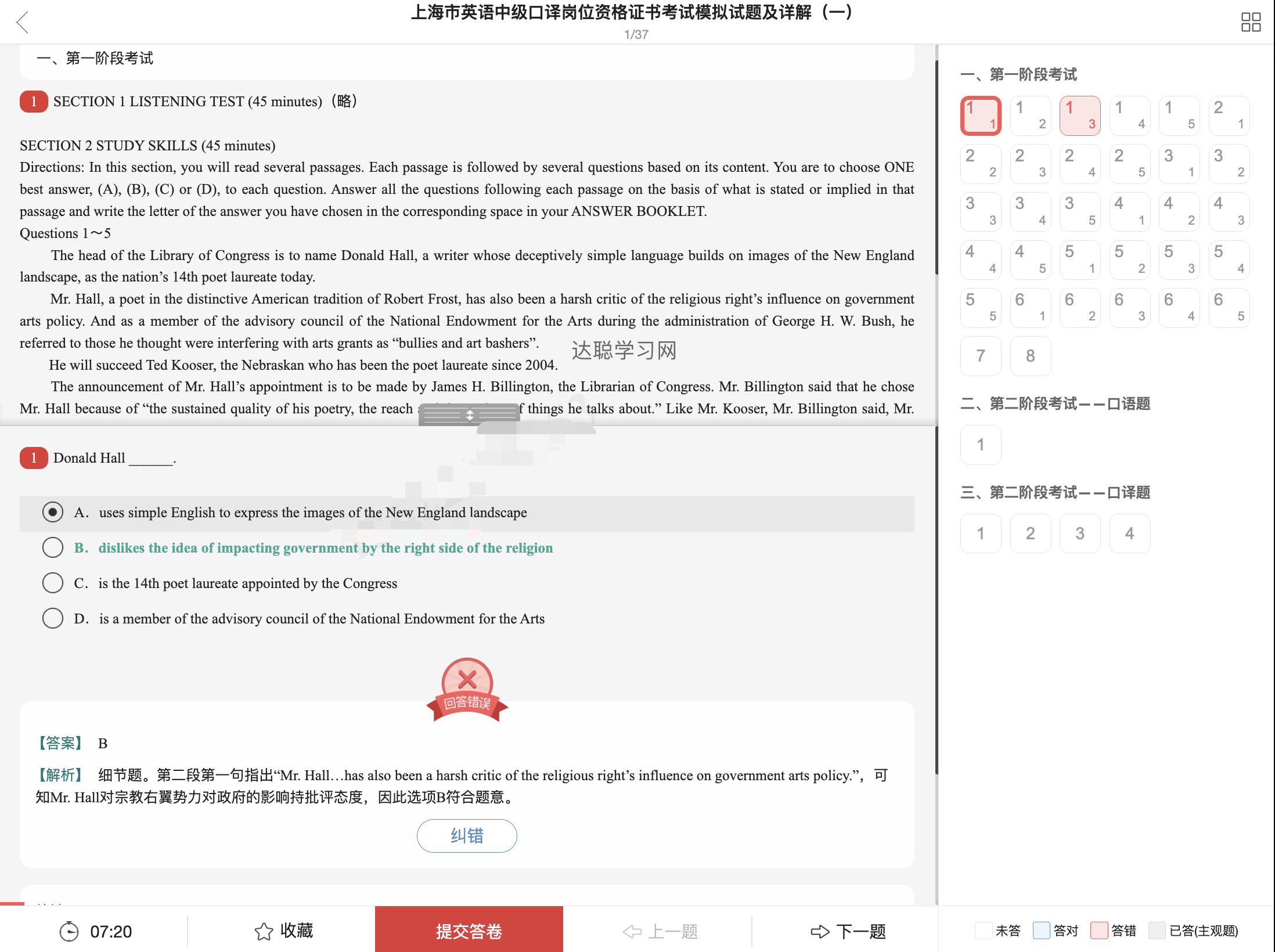